Declaration of solidarity by the resistance network switzerland with Andi

On demand of the Turkish state, our comrade A. of Red Aid International (RHI) and Revolutionäre Aufbau Schweiz (RAS) is facing trial before the Federal Criminal Court in Switzerland. The accusation is, among other things, a militant attack on the Turkish consulate in Zurich in 2017 at the time of the Turkish annexation of Afrin in Western Kurdistan (Northern Syria).

The struggle in solidarity with Rojava and all of Kurdistan gives hope to our struggle here. Wit has many facets, such as the building of a liberated civil society, the guerrillas in the mountains. It shows us that a different kind of life is possible, that fighting is worthwhile and that all means are legitimate. Now one of us is accused because she practically lives this solidarity. And an attack against one of us is an attack against all of us and our struggle for a better world.

It is not a new experience that progressive ideas are attacked by reactionary side. And this attack does not only come from the Swiss state with its indictment. The revolution in Rojava, the guerrillas in the mountains and the whole Kurdish movement are under massive attack from Turkish fascism. It is a war on different levels and with many faces.

Solidarity for us also means to attack, therefore we fight everything that threatens and assaults the revolution in Rojava and the Kurdish movement, especially here. We see this as our mission in solidarity. Turkish fascism also has its offshoots and friends here and those who profit from the war of Turkish fascism, be it through investments, trade or import. To fight all these here, that is part of it for us.

That an attack is followed by a counter-reaction does not surprise us in the least. That the Swiss state makes itself the aide of the Turkish fascism, surprises us little as well. Because the ruling class, whether here or there, follows its profit interests. Even if now and then the human rights situation in Turkey is criticized, the economic relations are further developed and deepened. To attacks with chemical weapons one keeps silent. A list of atrocities of Turkish fascism and its jihadist gangs can be continued at will – we have not forgotten anything, be it the fires in the cellars of Cizre, the massacres of Daesh or the countless people under torture in the prisons.

We will not stop fighting Turkish fascism, its allies, the profiteers of its wars and all those who oppose our struggle. 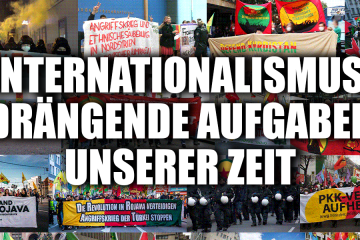 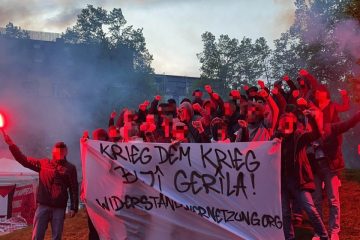